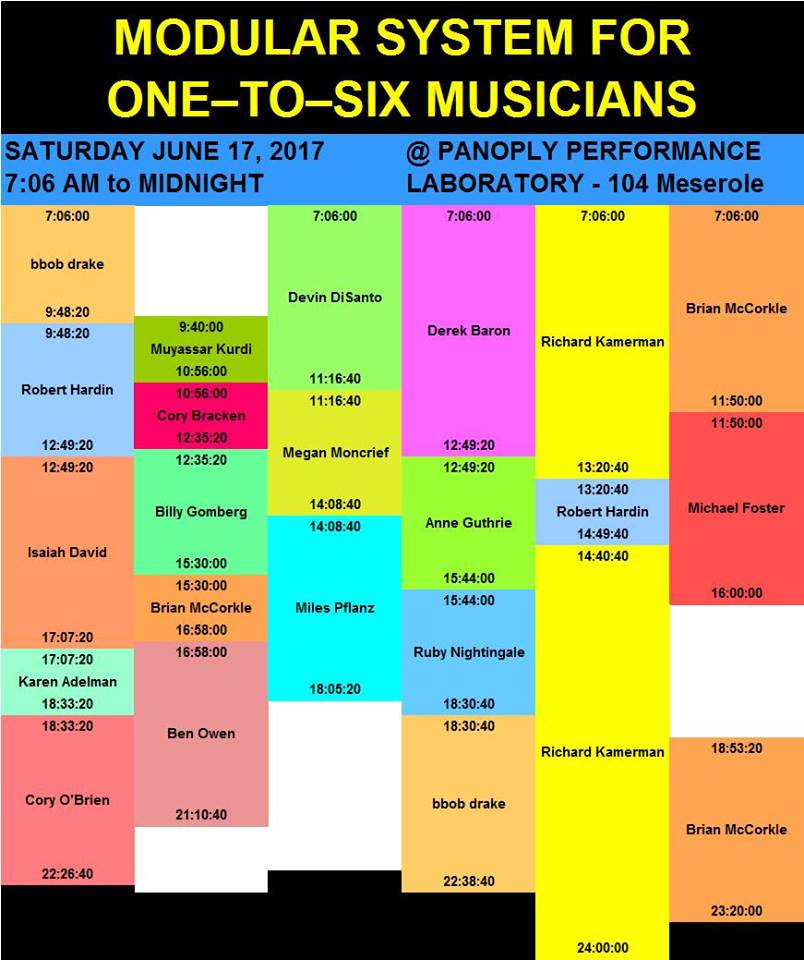 Were you there for our first attempt at playing this piece for an hour at Union Pool in 2011? Did you stop by the Fitness Center for Arts & Tactics when the piece was extended to (roughly) 14 hours in 2014?

You are invited to come hear (part of) the (nearly) 17 hour version on June 17, 2017 at Panoply Performance Laboratory.

The clock will begin counting promptly at 7:06AM and the work will conclude at midnight.

(Refer to event photo for player schedule, white spaces to be filled as musician availability is finalized)

Composer's note:
Modular System is a work of variable density, duration, complication and overall structure. An ensemble is assembled to taste based on known aesthetic leanings, a quantity of discrete actions is determined, pages are selected and ordered for performance, and a time unit is set. Performers are to define their own actions up to the determined quantity for execution in accordance with the instructions (presented only as 12x4 number grids on each page). The overall result is often unpredictable, though hopefully distinguishable from improvisation. Peformance aesthetics are intended to be casual - i.e. while not actively instructed by the score to be playing, a musician is not required to count minutes/seconds of rest stone faced; a break before commencing the next instruction is firmly not a silence for contemplation but simply a period of un-prescribed activity. While the work may reveal surprising patterns and motives as it unfolds, the effect of a shifting ensemble over the course of the day is to interfere with this rhythm as each player brings a new vocabulary of sounds. For that reason, a listener is encouraged to dip in and out of the work at any or multiple times during the duration rather than listen with the intent to discern any identifiable thread that holds it together.