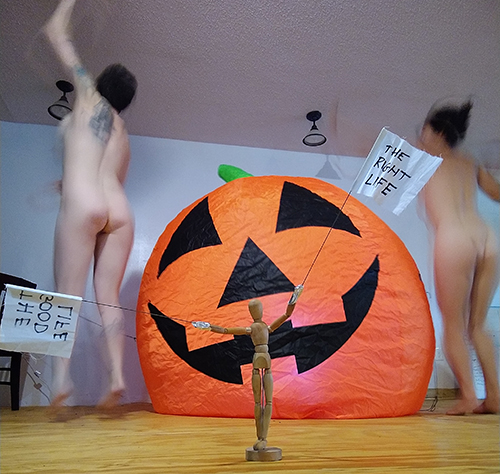 January 7, 14, 21 at Vital Joint as part of theexponentialfestival.org, Brooklyn, NY

PROTAGONY: A Play
Forming a new cast of “actors” for each evening, PROTAGONY combines forms of high school debate with king drag and “Theatrum Mundi” oratory theatricality. How each actor or subject sees themselves as a protagonist in their own life informs and structures ensuing abjective inquiries into self determination, civil responsibility, self-characterization, and construction of personal narrative. PROTAGONY stages conflicts between self and social narrative, between recognitions and presentations, and between “actors” and withdrawn “spectators.” How do narratives construct selves and vice versa? Who decides what is really going on here? How does what and who is centralized within visions of “Theatrum Mundi” materialize world(ing)s? The narrative “protagonist” position is agonizing yet powerful, dramatically saturated in suffering.

PROTAGONY: I am a broom who sweeps**  Kaia Gilje and Esther Neff work on wearing down the ridges of perception that divide inanimate objects from humxn bodies. “Performance art” often deals with animation and the vibrancy or liveness of matter/materials, both from ancestral perspectives and from contemporary theoretical physics perspectives. This work approaches “What Remains”? As a question about what and who and how is “alive,” inquiring into the qualities of liveness and deadness, use and function, enlivening, and being enlivened by. Relics used in this performances are a bell & a pair of underwear, broom, chain, clock, clothes pints & eyelashes, green paintballs, ironing board & tiles, red folding chair, sharpener, and broken stones.

Day One (Tuesday, 7-9pm in the Røde House) five local artists, invited through an Open Call, interpret conceptual events while witnesses and audience members mark states of mind, body, and context, socially composing a graphic score for movement and action.

Day Two (Wednesday, 10am-7pm) Esther Neff and Kaia Gilje use the socially-composed graphic score from the evening before, the work in the State of the Art exhibition, and responses to the economic, political, geographic, and social conditions of the Momentary and INVERSE to construct a durational performance throughout the galleries.