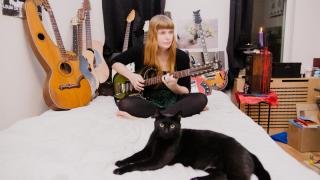 JOHN KRASZ http://johnniekrasz.wordpress.com/ seeks to bridge the musico-poetic divide through text-based arrangement and syllabic musical notation. His work struggles with such spectra as poverty and ornament, rigor and effortlessness, justice and militancy.

note: unfortunately, Sabrina Siegel had to bow out of the evening to mutual sadness, but taking her place is Esther Chlorine, keeping the original three lady lineup intact, in name at least.

Sandy Ewen uses extended technique and objects on her guitar - panning the resultant manipulations across two amplifiers to great effect.

Amy Mills creates and customizes her own Frankenstein guitars/instruments, getting really great sounds with a subtle composition sensibility.

*** There will be projections of Sandy's mesmerizing visual art as well as some other surprise art visual stuff.

*** Avant! Guitar! Night! is an ongoing series curated by Lucio Menegon. The next A!G!N! is June 19. http://tinyurl.com/bvhvp39