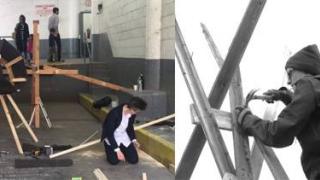 *****SOCIAL FABRICATION******two performances, one collective act of building, another assemblage of actions by a built collective, both performances lead and directed by fabricators.

“Capital circulates, as it were, through the body of the laborer as variable capital and thereby turns the laborer into a mere appendage of the circulation of capital itself.” (David Harvey, The Limits to Capital, 1982, 157)

In this project there are levels of realities and unrealities: of the limitations of the materials and those of my physical body, the nascent reality of the instructor’s proposal/concept, the reality of it’s manifestation as filtered through my body, sensibilities and skill.

There’s also the question of the real-ness of the situation, which is contrived and theatrical, but has tangible built results and real effects on my body and my mood. Even though it is a “performance” some frustrations and anxieties of my day job play out in it. So in that case I can’t separate its realness from
the realness of the job I am paid to do, which you could even call performed, as jobs are “performed” by workers. Also what is the reality of the job I am paid to do, since it is basically part of a kind of closed circuit of commodity production, and disconnected from realities adjacent to it, considering what I produce is prohibitively expensive and thus inaccessible to the vast majority of people in the place it’s produced. My labor will never yield enough to afford me the kinds of things I produce for others. So while my labor produces items which are hardly necessary for anyone’s survival, it also produces damaging effects to my own survival and emotional fitness, and the fitness of the environment.

MEMBERS OF F.A.G HAVE INCLUDED: