....lengthy exposition (scroll down)...Ayana Evans sent an email introducing performance art organizers in NYC/metro area to Atadja Lèwa, who will be in NYC for a very short time only, in the throes of some very intense international travel and practice. Yes, absolutely! We have a free night at PPL in the throes of show season, yes let's do it. Atadja says yes to Feb 1, and yes, curate other artists, who speak to themes like death, love, identity, sexuality (INDEED). Who's around and has been doing (p)articularly interesting things? Yes! 3dwardsharp hasn't performed @PPL recently (they just moved back to Brklyn), Uniska Wahalo Kano just posted on facebook that she wants "gigs"=DONE/anytime, and w/ Nia Nottage there happens to be email correspondence already in process about some potent work + yes, these four together crosses powerwires w/high potential to generate tactile+cognitive+agentic forms of disturbance and desire = invitation: information: confirmation (yes). Karl volunteers to document/perform doc. YAAS this is going to be *YES* (surge) now someone has to write "blurbs," for "the outside" which is a real problem I.E. if you want YES=thisisart one is supposed to write something like this::: "these four artists investigate thresholds and tolerances. using their bodies to transgress social codes, cross-contaminating "real" and virtual spaces, and working over the sharp edges of nationalities, personalities, identities, and intimacies blah blah "shock" metaphor" (basically: believe it lady, ART = states beyond death) bbbut to whom/&forwhy do we give up the ghost? (DOWN WITH CULTURAL IMPERIALISM) language is not the opposite of sex (YES! MAKE ME CRY) & you are not the opposite of me, death is not the opposite of any-thing (DRAMA) &neither is it no-thing; THEMES! take off your uniforms! don't just stand in the DOORWAY, come in!

Atadja Lèwa was born in Abymes, Guadeloupe, studied at the Institute of Visual Arts in Martinique and graduated from the École Nationale Supérieure de Paris Cergy (ENSAPC). Phibel explores topics such as the place of the individual within the collective identity. He has performed in the context of mass mobilizations in the streets of Paris, among which the “Never Poor Man” series that took place during the strikes of January 2009. His works featured in France, Benin, Cameroon, Martinique, and Guadeloupe.

Nia Nottage is a performance artist and sometimes dj/veejay/v-j day.

Uniska Wahalo Kano is a well-known interventionist, street performance artist, and serial breaker of dress codes who may be Googled. 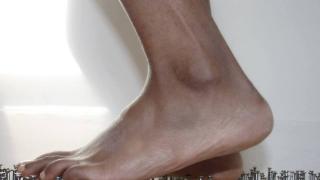 NIA NOTTAGE
Performance artist | Detroit
nianottage.com
Romance lives in the gap between reality and the dream world.
You don’t have to be miserable to be deep, relationships with objects teach us a lot about ourselves, libido is only demonized b/c it’s a powerful tool for haptic touch that can inform corporeal understanding and cause alternate perceptions of happiness. Nia Nottage is a performance artist.

FRANCES YEOLAND
Visual artist | Sydney
francesyeoland.com
Human attempt at understanding is about ownership, and labeling is a symptom of this failure. This work is a composition of material that asks for meaning from the viewer based on its appearance of logic and rationality. It's is an absurd puzzle of familiar, tactile and industrial materiality. It is a system of symbols taken out of context, reframing our perception of value and meaning.