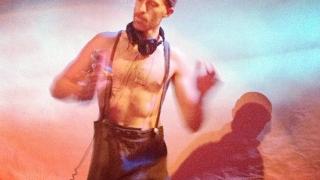 "CASINGS AND TREATMENTS," the second of a two-part performance event series curated by René Kladzyk as part of No Wave Performance Task Force, centers its inquiry around how the masculinized body is housed and modified in the performance of gender identity. Through interrogating masculinity in its material manifestations via human bodies, a group of performance artists will enact gender construction as process, co-constitutive relation, and ephemeral ideation.

Behold, artist IVY CASTELLANOS completes actioned tasks exploring the masculine gendered body, while VINCENT TILEY investigates restraint, control, and desire operationalized through the gaze, the skin functioning as artifice and sensual site of action, as Vincent hovers "rather motionless in a suit that is also a painting that is also a hammock that is also a sex swing." ANDY KUNCL engages with movement, sensory stimulation, and inanimate/animate constructive interaction in collaboration with a posse of movers, COLBY CANNON plays with protection, power, and muscle growth, while STUDIO ROSSI BRODY enacts a crime-scene investigation TV show in "Man Forensics," operating as social scientists, comedians, and erotic provocateurs.

Three artists explore different ways of working relationally, with and for audiences of individuals, and with and for the space.

Beer available for a donation, entrance free (suggested donation $5 for the artists)

The Bloodgates is an attempt to take some of the invisible elements of dance performance that make it so 'magical' in the moment - such as heat and breath and sweat and struggle - and make them visible, yet queered, troubled, abstracted, gruesome. Lighting Design: The Vigilante Design Group Sound Design: Erik Lawson Dancers: Greta Hartenstein and Sophie Sotsky

CROWNWORC performance draws from practices of trance and possession that Kladzyck observed while on an artistic residency at a pilgrimage site in the Atlas Mountains (Morocco), and utilizes movement, sound, and dynamic costume to explore relationships of trust, weight and ethereality, intimacy among strangers, and plurality within.

(italics) This is Art? is an exploration of many aspects of art. It breaks open the relationship between the audience and the performer, it bridges the gap between art and stream of consciousness, it provides a diorama of solo choreography. This work is all at once challenging, humorous, self reflective, and debilitatingly human.