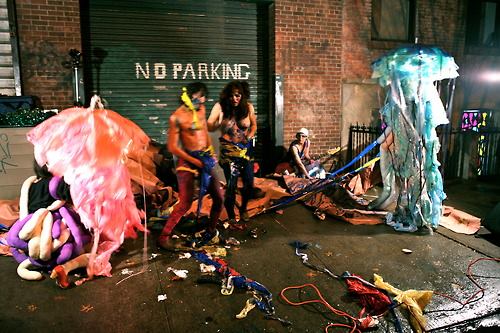 This show is also secretly part of the What is "experimental" music? series at Panoply Performance Laboratory co-curated in this case with Raul de Nieves.

HARIBO https://www.youtube.com/user/haribolivechannel HARIBO is the combination of artists Raul De Nieves, Jessie Stead, and Nathan Whipple. A master blend of early 21st century performance options, HARIBO released their debut single "Hell Is Where I Die" in 2011 and have spent the past few years touring Brooklyn and select cities internationally, presenting their trademark cross-genre pop-operas to sold out crowds.

Admiral Grey http://www.snakeintheboot.com Admiral Grey is a pandisciplinary artist and performer who writes, composes, directs, crafts, and choreographs without genre. A recent resident at The Field's FAR Space, this spring she debuted the modern theater piece “The Maiden” in collaboration with The Nerve Tank at LaMama Experimental Theatre Club, for which she composed and directed the music, sound designed, and performed. This summer she performed in "Feather Gatherers” by The Drunkard’s Wife at Ice Factory and continues to puppeteer with The Pigeoning at HERE Arts Center. She actively composes and performs with her bands Cellular Chaos, Ecstatics, B Roll and with various solo projects.