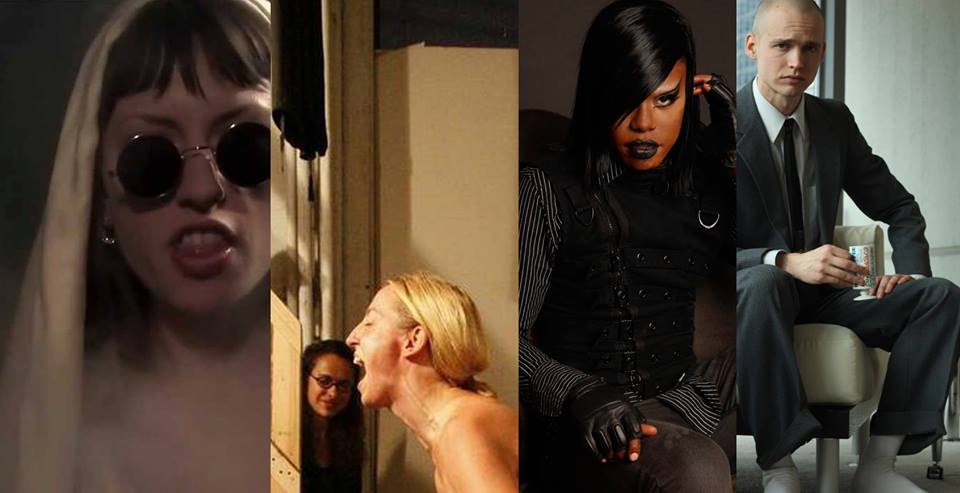 What they have in common is tremendous control, skill, and a strength: they are of power, the dramaturgical kind known sometimes as "character," as in, "to build it," o the horror.

ADAM ROSE is the Artistic Director of Antibody Corporation, a mission based organization specializing in mind/body integration. Adam makes work from the standpoint of a theoretical Antibody — an amorphous body that evades conceptual, genre, and formal categories. Since 2009, Antibody Corporation has presented works spanning dance, performance art, film, and music, in Chicago as well as nationally and internationally. www.antibodycorp.org

M LAMAR writes songs that are at once a product of his African American heritage, drawing heavily from the negro spiritual. Combined with his operatic voice and piano playing that is at once interested in western classical music and dissonant black metal Lamar’s sound makes one think that things are so catastrophic that the world might end at the conclusion of one of his tracks. Lamar’s work has been presented internationally, most recently at The Södra Teatern Stockhom Sweden, La MaMa New York, WWDIS Fest in Gothenburg and Stockholm, Joe"s Pub New York, Queer-Feminist Anti-Racist Performance Festival Stockholm Sweden, le poisson rouge new york, Performatorum Regina Canada, The International Theater Festival Donzdorf, Germany, Cathedral of St. John the Divine New York, and The African American Arts and Culture Complex San Francisco among others. M. Lamar is the 2013 recipient of a Franklin Furace Fund Grant. M. Lamar holds a B.F.A. from the San Francisco Art institute and attended the Yale School of Art in the sculpture program before dropping out to pursue music. Lamar has had many many years of classical vocal study with Ira Siff among others. http://www.mlamar.com/

THE BUTTRESS Straight outta New Jersey, the Buttress is a female filmmaker turned rapper as of Halloween Eve 2012. Although she enjoys butt humor, the name is a reference to the architectural structure. She likes to rap angrily about a range of topics, such as the Old Testament, phenomenology & post-partum psychosis, to name a few. She is a founding member of the elusive Ghost Gang, an eclectic group of filmmakers and musicians that all share a vision for the dark, experimental, and weird. A filmmaker first and foremost, you can watch all of her music videos here: https://www.youtube.com/user/yi3jane

LINDSEY DRURY Over the last three years Drury has shown work at the Kitchen, in Draftwork, Danspace’s Food for Thought, and the MR Fall Festival at St. Mark’s Church, Judson Church, the BAX Upstart Festival, Dance New Amsterdam, The Chocolate Factory’s Throw, Bushwick’s SITE Festival, Vaudeville Park, Chen Dance Center, Superfront Brooklyn, and in Panoply Lab's Performancy conferences, among others. She has also performed in works by Yvonne Meier, Ishmael Houston-Jones, Khecari Dance Theater (Chicago), Schall und Rauch Agency (Vienna), and with Guillermo Gomez-Pena at the Museum of Modern Art in Oaxaca and the Pickle Company in Salt Lake City. She writes about performance for Critical Correspondence and loveDANCEmore. Drury is also a founding member and central organizer for of The Woods Cooperative, an artist’s space-share in Queens, the creator of the term "Post-Dance," and founded the No Wave Performance Task Force through a residency at Gibney Dance in 2012. http://www.drearysomebody.com/

ANDREW BRADDOCK Andrew Braddock was born and raised in Fredericksburg, Ohio. He has shown performance work most recently in Chicago, at the Chicago Cultural Center and Mana Contemporary, and in New York, at the BAM Fisher theater as part of the LEIMAY-CAVE dance company. He now lives on a pig farm in Lisle, NY and is working on a video piece conceived while in residency at the Wassaic Project this past winter.