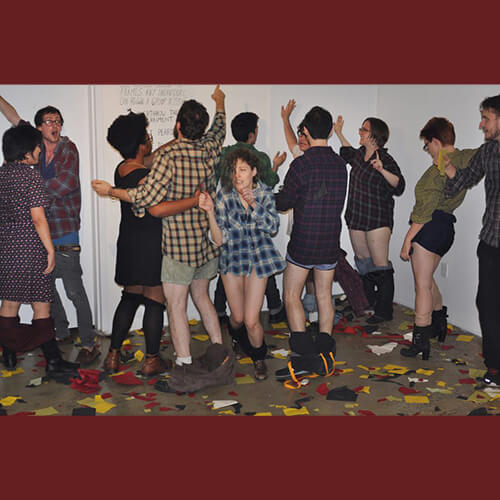 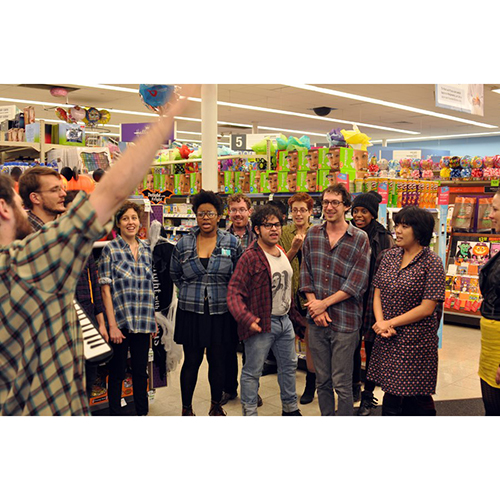 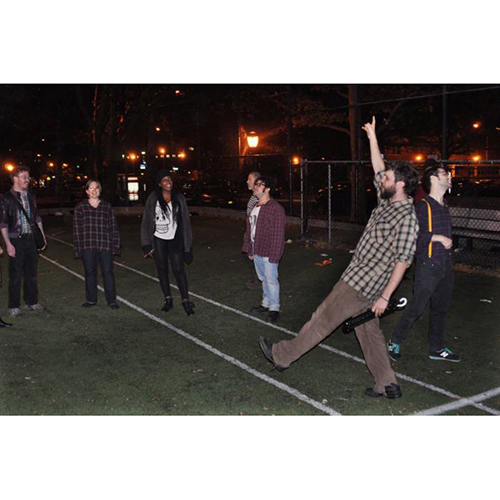 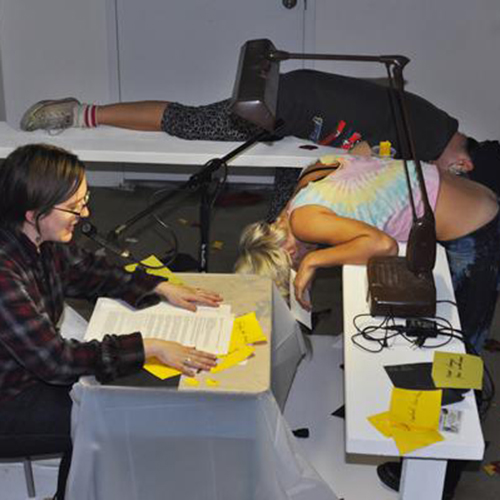 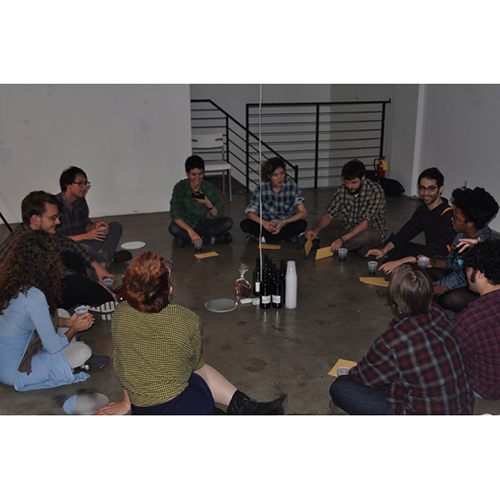 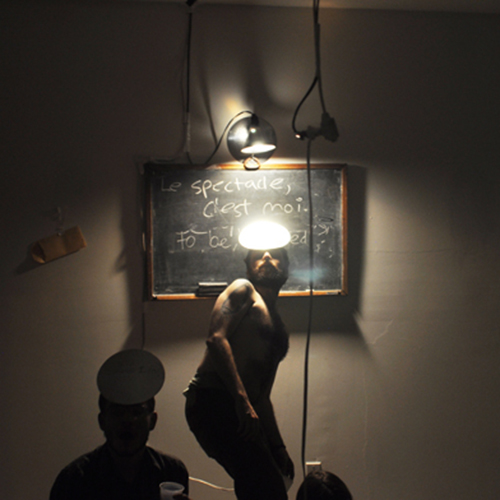 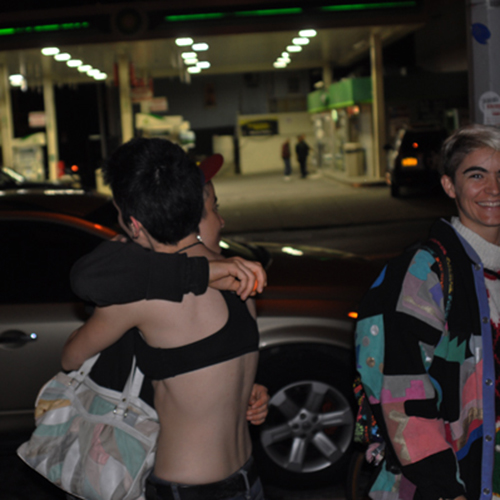 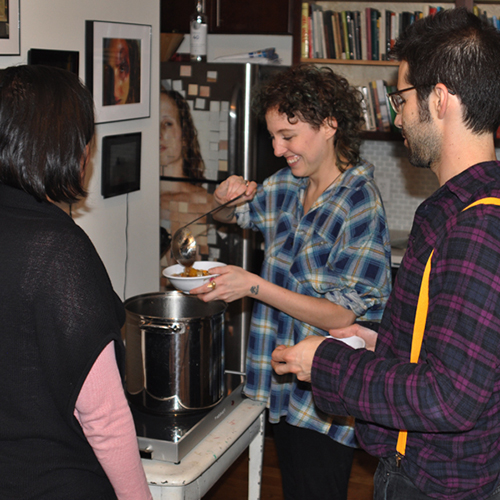 PPL were commissioned via Glasshouse’s HOMAGE FACTORY to stage activity/To what extent this activity can be bracketed out artistically/Or seem to function as an agreement on a particular reality/ Was up to the participants individually, situationally.

Structure and text by Esther Neff

To listen to the opera learned during part #3: OPERA RECORDING; text by Buckminster Fuller

The text on the desk during part #2 of Any Size Mirror is a Dictator: Homage to Allan Kaprow:

Read at least one section from “*” to “*”. You may then pass on the text to another reader or continue.

Hello, my name is Allan Kaprow.

I tell you a lie and you do not believe me. If I was pretending to be Allan Kaprow, you would still know that I am not the real him, but you might imagine with me, you know, for fun, that the lie isn’t a lie. We would enter into collusion, during which time; I would be authorized to represent Allan Kaprow. That would be theater, which is inherently based on agreements on lies. * Understanding society is as easy as imagining what it is.

All of Capitalism is a theater, containing many agreements on lies about knowing. For example, currency is a lie, it is just paper and cheap metals, but it is authorized to represent value.

Hello, I am not Allan Kaprow.

It’s all very fragile. It’s as fragile as walking out your front door and not knowing what’s going to happen. I don’t want to be afraid of the indeterminacy of Being, but also I don’t want the fears that have accumulated via layers of industrialized concern to dominate our emotional relationship with states of unknowing.

There is a coin that is constantly in the air, on one side is performance, and on the other side is not-performance. On one side, a lie, on the other, the truth. This is the stupid perception I am toying with, because I think the coin spinning around so fast that it looks like a sphere, or a drop of molten copper. There’s absolutely no way to frame this dichotomy between “not true” and “true,” between “theater” and “reality.” If we can’t frame the difference, what does it matter if the differences even exist?

Theater expects audience or spectators to recognize a state of identification, a simulation of consciousness. I propose a theater for the performers only. Not existing without audience, but with as many audience members and performers as there are humans present, with actions of interpretation and action all practiced by everyone.

It’s not going to happen but it might happen.

Q: what is a "frame"? A: in this context it is a way of organizing a way of looking at something. It is a formalized way of seeing. Frames are articulated or defined so that subjective perspectives and interpreted meanings can be shared or even known. “framing” is an action, “a frame” is a perception-object.

The obligatory and determined framing of our existence during this performance “as art” (we can only assume) is expected to involve its own disciplinary modes, which in this case are meant to inform our creation of a “piece of art” in conjunction with our artistic desires (?) or Interests (?): we will attempt to escape pure simulation by sliding along the spectra of forms that exist between the binaries that Kaprow's work (framed as art) constructs. Can we use his practices as "ready-made material" in this way? (for examples of these "spectra of forms" i.e. art-frames vs. non-art frames/artist vs. spectator/private vs. public/etc, dredge up your own associations)

Kaprow watched shoppers try on clothing. He posed like an anthropologist behind a tree, watching “native women” bathe. He rarely acknowledged his own gaze. This is a glass cube to which most men who made social theories in the 1950’s are contextually contained.

(Q: what is a "spectrum"? A: in this case, it is a unit of gradual, modal change ["grey area"] between two ideas/structures which are posed as operating opposites to one another).

Spectrum One: between A. the desire to create "art content" vs. B. to destroy art content. To set up a situation that negates "existing content," and poses the performances of "artists, “art" as “lies” inherently establishes the idea that there is an empiric existence somewhere.

i.e. in order for there to be lies, there has to be a truth.

Kaprow wrote that "The experimental artist today is the un-artist. Not the anti-artist but the artist emptied of art." (1971). He spoke to an "anti-theater" that echoes situationist arguments against spectacle via the total erasure of artistic authority, and/or via the framing of daily life AS art. It is possible that he thought this would make art closer to the truth that he believed existed.

Belief in a dichotomy between art and life is necessary to work towards “blurring the boundaries” between them. This is “soft deconstruction” of the kind proposed by Derrida.

Kaprow’s beliefs in reality resulted in this spectrum between an artistic practice that requires imagination (fraud), reflects or expresses a total authorial vision (symbolizes the absence of reality) and an artistic practice that seeks (impossibly as it becomes “the real”) to erase itself. Along this closed spectrum are different levels of "artistic control," from through-writing music and text through the construction of environments and situations, through simply framing a period of time or an existing daily process as "art." All result in art, if the frame remains.

Spectrum Two between A. collaborative art-making or framing the daily as art as a socio-political act in and of itself vs. B situational construction only, with structures "activated" or content "generated" by the “general public” who are “not artists.” Kaprow also worked along this spectrum between "cast-making" or "band-building" processes from theater, dance, music and "social arts" methods which, to a large extent, value collaboration with strangers and "non-artists" as a further erasure of artist-audience relationships. "Happenings" are often framed as spontaneous and public, yet we know that his group of close friends were the primary "public" and that friends/members of an artist's community can "spontaneously" begin jammin' much faster than a group of strangers. How do humans make art together, if they are trying not to frame it as art or come together at a site designated for art? We move along another spectrum between institutional, internal "casting" of professional artists and "working with whomever is there" as generators of artistic experience. We both claim and relinquish our “roles” as “artists” but can never really escape the structurally-embedded claim to artist-ness. Cough.

it is, on the other hand, possible that art-making is a daily practice. It has its frames, just as cooking has its cuisines. The art world is not the only collection of folks authorized to frame art, just as food critics and chefs are not the only ones who know what know what they’re eating.

The intelligence of the human animal is another lie of capitalism. I mean, the lie that some human animals are more intelligent than others. Intelligence is not something you have, it is something you practice, even something you perform. It is a way of framing existence so that you can make decisions, actions, reactions to it. This lie about hierarchized intelligence is why our binary candidates for president don’t talk about anything complicated or interesting; they both really truly believe that their citizens are too stupid to understand complexities, subtleties, and moreover, too stupid to practice collective intelligence, or collective envisioning.

how much does anyone understand, and what things do they understand? The situation is always in flux, but it can be pushed all the way into a kind of spiritual understanding, during which consciousness of Being is shared as a collective experience. Is that true?

An homage is a recognition of influence, a framing of a way of knowing. Influence is not something that can be charted, but it can be interpreted. Allan Kaprow represents certain conceptions to us. We agree with many others that the ideas Kaprow articulated in writing, and (we glean through documentation and more writing) in his “performances” that enact his certain ideas, are IMPORTANT. This just means he interests us. We recognize (re-cognize/interpret/frame) his influence.

The connection between Allan Kaprow’s theory and his work could be called his “practice.” In this performance, we are interpreting his “practice” across decades and contexts and across many different frames. We identify his theories and work on many different levels, from within the art-historical trappings of performance through forms of political insurgency, through modes of public advertising…and through the many frames we peer through, there is Allan Kaprow, peering back.

This text is anonymous. It is not written by Allan Kaprow.

Instructions for a happening: there are no images. Nobody mentions naked girls, the gas station across the street hovering like luminescent jellyfish over the dark asphalt, the back of an old man’s neck, or rain washing something away, we can no longer pretend that train-of-thought is somehow transcendent of “existing culture,” we are culture, there are no Others.

nobody is exempt. Any intelligent design is art, not nature. Any size mirror is a dictator.

There is no possible way for PPL to confuse this 4-hour performance with daily life. This performance is framed as a performance. It is conscious of itself as a performance. This is all very well and good in the theater, it is still theater. You know why? Because we all agree on what is happening. The true difference between theater and anti-theater is agreement on the lie that is framing. In anti-theater, the frame is constantly shifting, it is projected by individuals and these frames are in conflict. Here, the performance is unraveling in a gallery, which is framed by websites and knowledge of the space’s past. This performance was advertised as a performance, and people were invited to come and perform and participate. Some smaller frames may be shifty, based on individual knowledge, interpretation (subjective framing) and agency, but we all agree on who we are and what we’re doing here: we are paying homage to Allan Kaprow through a performance. As such, this performance refuses to conceive of itself as a lie.