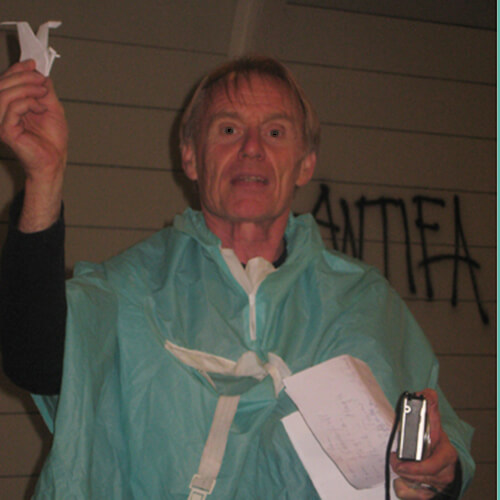 The Institute for Local Discovery proudly presents: Bavaria Rundgang evolved from a collaboration between Esther Neff and Dina Keller as part of The Internationalists Director’s Collective, a series of pieces on the 7 Deadly Sins performed as a workshop at The Public Theater in NYC.

Esther travelled to Munich to continue work with Dina Keller, the two forming a tour for the Theresienwiese in Munich, Germany, July 2008. Co-produced with The Internationalists Directors Collective.

Flier text:
Nationalism is made concrete by Mater Bavaria, the bronze goddess who overlooks the The Theresienwiese, the massive field where the Oktoberfest takes place, and The Statue of Liberty, the copper monument to international republicanism (originally given to the U.S by France to commemorate Emancipation of American slaves) that has come to be a symbol of welcome to immigrants. In the form of a local tour, historical information on the two statues is confused and altered, and David Copperfield heals all wounds.

Qualia was created and performed at BAX in 2009 by Esther Neff (director/designer), Matthew Stephen Smith (writer), and Brian McCorkle (music).

A trans-atlantic project between Munich director Dina Keller and Brooklyn director Esther Neff in which simultaneous experiments in two parks (prospect park and the englischer garten) tease out the truth about neutrinos, neural connections, and the butterfly effect. With text from Romeo and Juliet. Anika Solveig, Chiasui Chen, and Georgiana Avram braved the cold to perform on the U.S end.

Devised by Tess Jamias, Esther Neff, Chiasui Chen, and Chelsea O’Connor, performed during Alternating Current at The Battle Ranch (Vampire Cowboys) and BAX (Brooklyn Arts Exchange) December 2007. Blurring the lines between cultural identity and individuality, subjective experience and political shift, four women (1 Filipino, 1 Taiwanese, and 1 Midwestern American) tell their stories in a way that no one could possibly want to listen, complete with loud complaint, emotional indulgence, and a complete lack of objectivity or self awareness. Fight choreography consumes this short piece as battles for a chance to voice opinion and tell personal stories becomes an outright war for global dominance.